The South: Country of Burnt Njáll

Njáls saga. Where to begin with the saga that is reckoned to be the jewel in the saga crown? In addition to its peerless reputation, at over 450 pages in the Íslenzk fornrit edition (Brennu-Njáls saga, ed. Einar Ól. Sveinsson, Reykjavík 1954), it is by far the longest of the Íslendingasögur: the logistics of mapping this saga onto and around the landscapes of the south of Iceland (where the greater part of its action unfolds) filled me with no small sense of trepidation.

A circular email was sent round some months ago advertising a 4-day ‚Njáls saga on horseback‘ tour organised by a company called Riding Iceland, and led by Dr Jón Karl Helgason, a professor of Icelandic literature at the University of Iceland. I signed up for the tour...and thus took on the challenge of Njála. 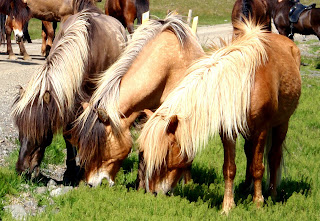 The tour proved to be a physically exhilarating and immensely thought-provoking experience. I supplemented the Njáls saga days with an inital 3 days helping to drive the herd of horses south from a farm between Geysir and Gullfoss to Vellir (the farm on which Njáls saga begins), where the tour commenced, and back north again for another 3 days after the tour had formally come to an end. Amongst other river encounters, this involved half an hour of riding through the mighty glacial river Þjórsá at a ford called Nautavað -- a crossing point for over 1000 years on account of the riverbed there comprising lava rather than sand which is constantly displaced by the currents. Grey waters churn around the herd of loose horses who instinctively strike off downstream with the current and must not be followed; I contemplate the extraordinary dizzying sensation and feeling of not moving forward at all when looking down at the swirling waters enveloping me and my horse, this suspicion being simultaneously contradicted by my horse‘s steady muscular exertions and the gradual nearing of the opposite bank.

The itinerary took us from one Njáls saga site to another – but not by adhering to the chronological progression of chapters and events in the written saga. In this, I was struck even more by the way that the events that make up any one saga can be ‚read‘ very differently through the physical exploration and familiarisation of the landscapes in which they are set, as opposed to an armchair or desk-based linear reading of that saga from the first chapter through to the last. Specific places in a local area bear three-dimensional witness to the narrative that has written itself into and around the topographical features of the landscape, become embodied in grassy slopes, rocky screes, open plains, riverbanks. As one moves around a district, this leads one to a sense of any one saga as a much more flexible entity – a narrative whose component parts can be processed mentally in any order, as individual places one encounters present their stories and associations – and I am beginning to think that this is a different and very powerful theoretical framework within which to understand the sagas, or at least a means of gaining insights into understanding how local Icelanders might have received or processed the saga set in their district from the medieval period onwards.

In terms of its structure, Njáls saga can be said to be formed of three main narratives: firstly, that of Gunnarr of Hlíðarendi (one of the most perfect of saga heroes) and his eventual feud-related death at the hands of enemies; then that of Gunnarr‘s close friend, the wise Njáll of Bergþórshváll, and his and others‘s deaths when their farm is burned by a band of men lead by Flosi Þórðarson; and finally, that of Kári Sölmundarson and his pursuit of vengeance for the burning of Bergþórshváll, both in Iceland and abroad.

The landscape of Njáls saga is dominated by the single mountains and mountain-ranges that come in and out of one´s line of sight in varying panoramic configurations as one rides around the area: the volcanic Hekla, snow-streaked, not mentioned in Njáls saga but a powerful presence; Þríhyrningur (‚Three-Corners‘) which is a pivot around which much Njáls saga action revolves; the strange isolated Stóra-Dímon which rises jagged from the flats of the Landeyjar region, beside the wide shifting sands and streams of the Markarfljót river; then to the east the ranges of Tindfjallajökull and the infamous Eyjafjallajökull. These features have remained a constant in the landscape of this part of the south, though much else has changed significantly over the millennium between the events of Njáls saga and the present day. The course of the Markarfljót river has shifted continuously over time; volcanic eruptions over past centuries have left their lava-sprawling marks across the region; deforestation, erosion, and modern drainage have altered the prospect of great stretches of land; endless violet-blue lupins introduced to halt erosion in recent decades now carpet hillsides, plains, lava-fields.

On the green slopes at Hlíðarendi, from where one looks south down across the Landeyjar plains and over to the Vestmannaeyjar – when cloud or volcanic ash caught in the winds isn't shrouding the distance -- Gunnarr lived with his wife Hallgerðr. Hallgerðr is exceptionally and troublingly beautiful and note is made several times throughout the saga of her long blonde hair. On gazing on her as a young girl, Hallgerðr‘s uncle Hrútr Herjólfsson (who plays a part in Laxdæla saga) wonders how ‚thieves‘ eyes‘ have come into the family: a detail which later becomes significant. Hallgerðr is a hard woman who had been married twice before Gunnarr, and had lost both husbands to the axe of her dastardly foster-father Þjóstólfr. The first husband was killed with Hallgerðr‘s approval, the second was a great loss to her. Chapters after Hallgerðr has married Gunnarr narrate the growing tensions and conflict between Hallgerðr and Njáll‘s wife, Bergþóra: insults and the initiation on both sides of a series of eye-for-eye killings do not destroy the deep friendship between Gunnarr and Njáll, however. Famine prompts Hallgerðr to send a slave to steal cheese and butter from a neighbouring farm; when Gunnarr finds out, he slaps Hallgerðr for this greatest and most shameful of crimes.

Collingwood writes of the way in which at Hlíðarendi, „scenery and romance are inseparable...no modern traveller can fail to note that the one place of all the world where a man, in those distant and rude days, chose deliberately to die, rather than go out into exile from it, was so magnificently situated“ (Pilgrimage, p. 30). Gunnarr is exiled by law for a period of 3 years as the consequence of a feud; he prepares to leave the country and rides south from Hlíðarendi with his brother Kolskeggr. Chapter 75 of the saga describes how the brothers ride towards the Markarfljót river: þá drap hestr Gunnars fæti, ok stökk hann ór söðlinum. Honum varð litit upp til hlíðarinnar ok bæjarins at Hlíðarenda ok mælti: „Fögr er hlíðin, svá at mér hefir hon aldri jafnfögr sýnzk, bleikir akrar ok slegin tún, ok mun ek ríða heim aptr ok fara hvergi“ (Brennu-Njáls saga, p. 182; 'Then Gunnarr‘s horse stumbled, and he fell from the saddle. He looked up to the slope and the farm at Hlíðarendi and said: „Fair is the slope, such that I think I have never seen it so beautiful, pale fields and mown homefield, and I will ride back home and not travel on“'). A place – or a stretch of land -- called Gunnarshólmi is the spot from where local people believed Gunnarr looked back at his homestead: Gunnarr‘s remark is one of the most poignant and famous phrases in saga literature.

Gunnarr holds off his enemies until his bow-string breaks. He asks Hallgerðr to give him two locks of her famous hair which she and his mother can twist into a replacement bow-string. ‚„Does anything depend on it?“ she says. „My life depends on it,“ says Gunnarr, „because while I make use of my bow they will never be able to attack me.“ „Then I shall,“ she says, „remind you of the slap, and I don´t care whether you defend yourself for a long or a short time.“ „Each has their own mark of distinction,“ says Gunnarr, „and I won‘t ask you any longer for this“‘ („Liggr þér nokkut við?“ segir hon. „Líf mitt liggr við,“ segir hann, „því at þeir munu mik aldri fá sóttan, meðan ek kem boganum við.“ „Þá skal ek nú,“ segir hon, „munu þér kinnhestinn, ok hirði ek aldri, hvárt þú verr þik lengr eða skemr.“ „Hefir hverr til síns ágætis nökkut,“ segir Gunnarr, „ok skal þik þessa eigi lenga biðja“, Brennu-Njáls saga, p. 189).

Collingwood describes how, in 1897 when he visited, he was shown ruins said to be those of Gunnarr‘s hall beside the then-modern farmhouse, though Collingwood expresses doubts over the attribution on the basis the „slope is so steep that it is hardly likely they [the ruins] can mark the site of the principal residence“ (Pilgrimage, p. 30). There is no farm at Hlíðarendi today, though a church stands on the land. There was no-one around to ask about the location of Gunnarr‘s howe or mound, sketched by Collingwood (and which the saga relates opened up on a couple of occasions when the shepherd and serving-maid were passing by, revealing Gunnarr singing and reciting verses happily), nor the smaller mound said in past times to mark the grave of Gunnarr‘s faithful Irish hound Sámr. The manager of the local ‚Njáls saga‘ museum in Hvolsvöllur said that he had met the last farmer of Hlíðarendi in the late 1970s and been shown these spots and others connected with the saga; this farmer is no longer living, and it seems that local knowledge about Hlíðarendi (and other places around the district associated with the saga) has diminished to the point where in many cases, such extra-saga place-names and locations are not much more than shadowy remembrances or the subject of speculation.

It seemed remarkable to me that this should be the case given the acclaimed place of Njáls saga in the canonical Íslendingasögur; in the next post, something of Njáll and Bergþórshváll will be presented, along with further notes considering the extent to which Njáls saga seemed, to me, to be alive in the local landscapes in which it is set. But if the precise location of Gunnarr‘s mound—or a mound said to be Gunnarr‘s, at any rate—has been lost, his reputation as one of the most peerless of saga heroes still lives on. Thus Hávamál: Deyr fé, / deyja frændr, / deyr sjálfr et sama; /ek veit einn, / at aldri deyr: / dómr um dauðan hvern ("Cattle die, kinsmen die, you yourself will die too; I know one thing that never dies: the honourable reputation of each dead man").

Posted by Emily Lethbridge at 12:13

About Me and This Blog

I am a 33-year-old academic researcher currently based in Reykjavík, Iceland. In 2011, after many years studying the medieval Icelandic sagas at the University of Cambridge, I set off on a year-long solo research project/adventure which involved reading each saga 'on location' around Iceland.

The 1000-year-old past described in the medieval Icelandic sagas is written into the landscape all around Iceland. In 'The Saga-Steads of Iceland: A 21st-Century Pilgrimage' project, I explored how the sagas are a living literature with an existence beyond the printed page.

I used this blog to report on my progress and write about specific sagas and my experiences over the course of the year; I am currently completing a book about the project.

Information about my academic publications can be found on my academia.edu page.

What are the medieval Icelandic sagas?

Sagas and Sagasteads in the Media

The Saga-Steads Project is supported by

Museums and Places of Interest in Iceland