Sagas and the Embulance on the airwaves 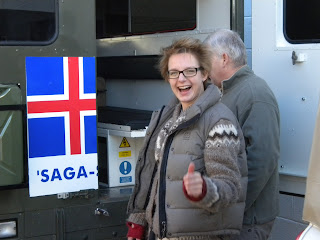 Today was an epic day. While students were massing in London in the run-up to the vote in Parliament to increase university tuition fees (a disastrous, if not unsurprising outcome with the bill being passed by 21 votes), I collected the Embulance keys and took her on her maiden drive from Nene Overland in Peterborough down the A1/A14 to Cambridge. On arrival, I was straight into a live interview outside the BBC Cams studio which was conducted in the back of the van with Sue Dougan for her  Radio Cambridgeshire 'Sue Dougan in the Afternoon' programme. This was followed by some late afternoon filming for BBC Look East outside the Marshall's Cambridge Control Tower. In a pleasing twist of fate it transpires that the vehicle was converted into an ambulance (for the RAF) at Marshall's in the late 1980s...better yet, the designer, Kevin Peacock, still works for the company and came over to reacquaint himself with his creation and to give me the vehicle's original coachworks badge.
The radio interview is available for the next 7 days here (starting around 18 mins in after some Elvis... a good 12 minutes or so of chat!)
http://www.bbc.co.uk/iplayer/console/p00chjqj/Sue_Dougan_in_the_Afternoon_09_12_2010
The Look East segment will be broadcast locally in the East of England after the national news around 18.45 tomorrow (Friday) evening... I'll put a link up to it after it's gone out for those who'd like to see what the inside of the Embulance looks like!
Posted by Emily Lethbridge at 19:42

About Me and This Blog

I am a 33-year-old academic researcher currently based in Reykjavík, Iceland. In 2011, after many years studying the medieval Icelandic sagas at the University of Cambridge, I set off on a year-long solo research project/adventure which involved reading each saga 'on location' around Iceland.

The 1000-year-old past described in the medieval Icelandic sagas is written into the landscape all around Iceland. In 'The Saga-Steads of Iceland: A 21st-Century Pilgrimage' project, I explored how the sagas are a living literature with an existence beyond the printed page.

I used this blog to report on my progress and write about specific sagas and my experiences over the course of the year; I am currently completing a book about the project.

Information about my academic publications can be found on my academia.edu page.

What are the medieval Icelandic sagas?

Sagas and Sagasteads in the Media

The Saga-Steads Project is supported by

Museums and Places of Interest in Iceland